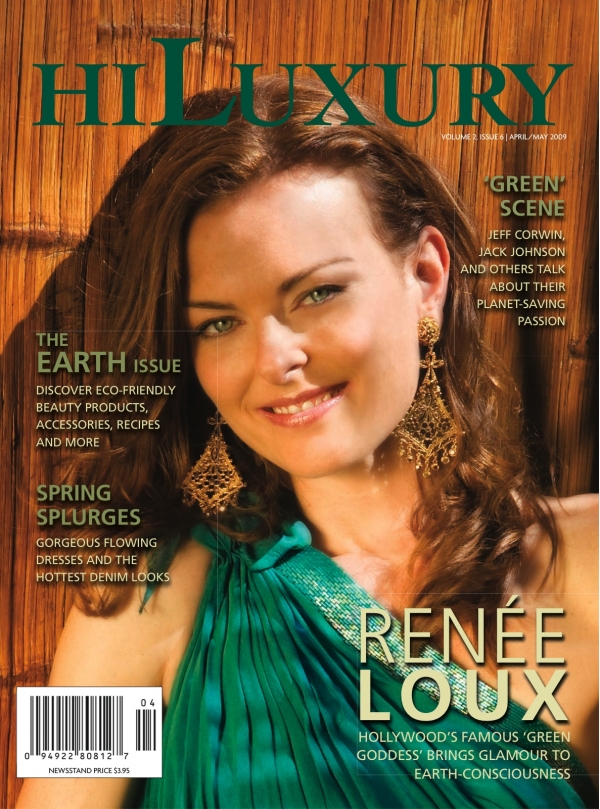 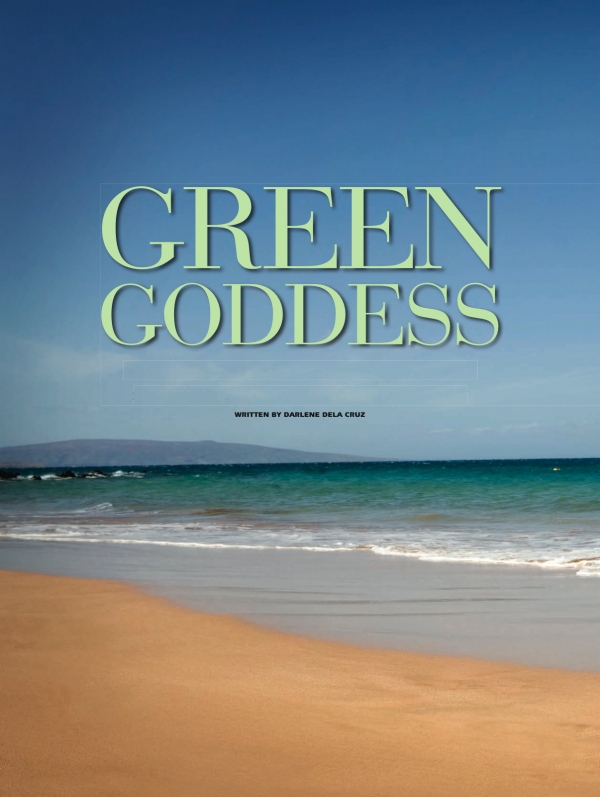 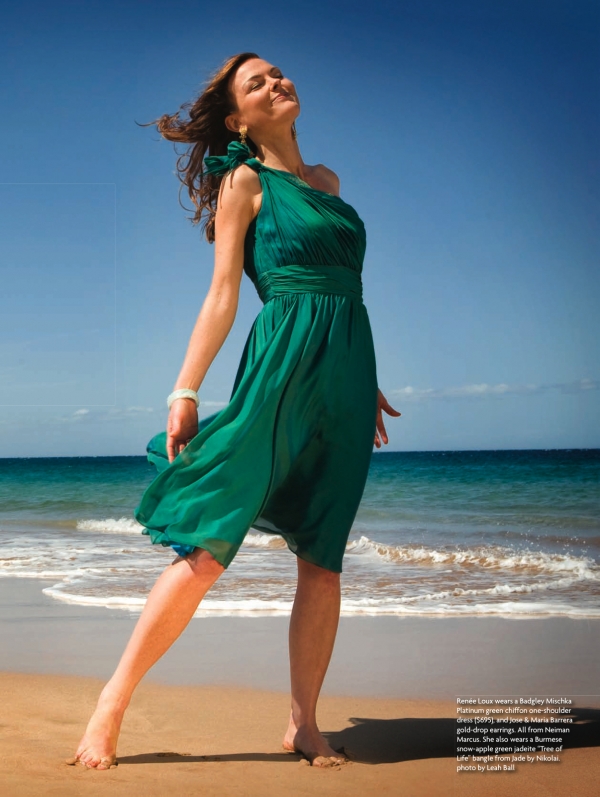 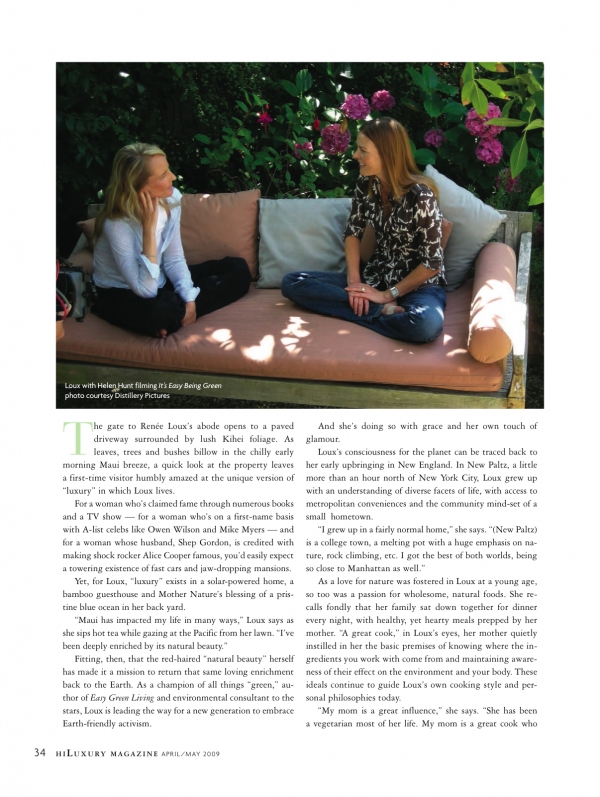 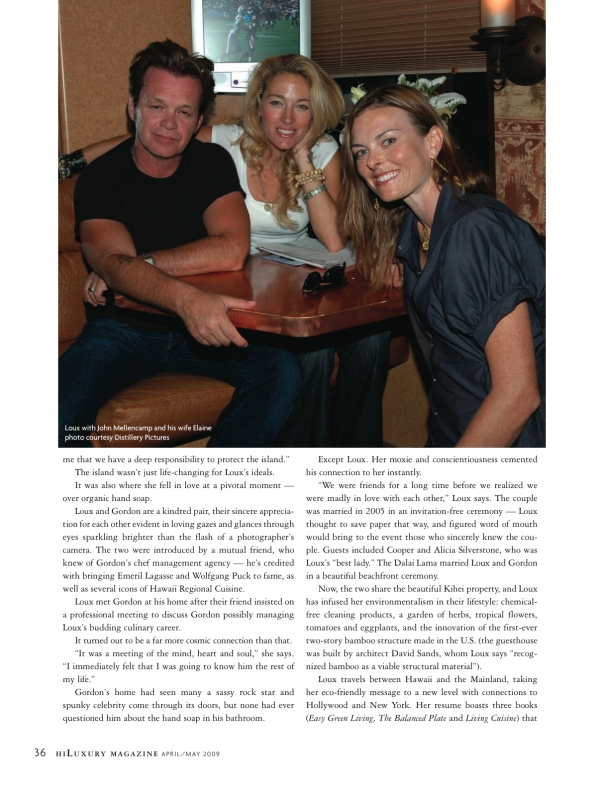 The gate to Renee Loux's abode opens to a paved driveway surrounded by lush green Kihei foliage. As leaves, trees and bushes billow in the chilly early morning Maui breeze, a quick look at the property leaves a first-time visitor humbly amazed at the unique version of "luxury" in which Loux lives.

For a woman who's claimed fame through numerous books and a TV show - for a woman who's on a first name basis with A-list celeb like Owen Wilson and Mike Myers - and for a woman whose husband, Shep Gordon, is credited with making shock rocker Alice Cooper famous, you'd easily expect a towering existence of fast cars and jaw-dropping mansions.

Yet, for Loux, "luxury" exists in a solar-powered home, a bamboo guest house and Mother Nature's blessing of a pristine blue ocean in her back yard.

"Maui has impacted my life in many ways," Loux says as she sips hot tea while gazing at the Pacific from her lawn. "I've been deeply enriched by its natural beauty."

Fitting then, that the red-haired "natural beauty" herself has made it a mission to return to that same loving enrichment back to the Earth. As a champion of all things "green", author of Easy Green Living and environmental consultant to the stars, Loux is leading the way for a new generation to embrace Earth-friendly activism.

And she's doing it with grace and her own touch of glamour.

Loux's consciousness for the planet can be traced back to her early upbringing in New England. In New Paltz, a little more than and hour north of New York City, Loux grew up with an understanding of diverse facets of life, with access to metropolitan conveniences and the community mind-set of a small hometown.

"I grew up in a fairly normal home," she says. "(New Paltz) is a college town, a melting pot with a huge emphasis on nature, rock climbing, etc. I got the best of both world, being so close to Manhattan as well."

As a love for nature was fostered in Loux at a young age, so too was a passion for wholesome, natural foods. She fondly recalls that her family sat down together for dinner every night, with healthy, yet hearty meals prepped by her mother. "A great cook," in Loux's eyes, her mother quietly instilled in her the basic premises of knowing where the ingredients you work with come from and maintaining awareness of their effects on the environment and your body. THese ideals continue to guide Loux's own cooking style and personal philosophies today.

"My mom is great influence," she says. "She has been a vegetarian for most of her life. My mom is a great cook who always used fresh food. We considered how food is grown and how that impacts our family."

With her ethical consideration of food, Loux decided to go vegan at the age of 17. But beyond her veganism being an exercise in sensitivity, it was also Loux's first strong stance on a subject and her first insight into the power of one person being able to make a worldly difference.

"I had a real deep love for animals, and I wanted to be compassionate," she says. "I also did it to rebel. It was a way for me to make my opinions known - mindless rebellion being harnessed into mindful action."

Loux went on to attend the University of Vermont at Burlington, where she studied nutrition. After a couple of years, she realized that her curiosity extended beyond what her college courses were able to teach. Loux abandoned conventional studies and embarked on an independent quest to satisfy her desire to meld the facts and figures of food science with the hands-on approach of culinary arts.

"The traditional study of nutrition was only a piece of the puzzle," she says. "There's a glaring gap with no practical study - how do you get the nutrients in you? I wanted to bring the two fields together."

She jokes that she's done enough research on food to equal a master's degree. But for Loux, the reward is the fun of the ride.

At the tender age of 20, Loux moved to Maui "sight unseen." With a leap of faith, she brought to the Islands her all-natural cooking techniques, and in 2000 opened The Raw Experience in Paia. The restaurant was innovative in its focus on serving food as close to its uncooked state as possible and taking advantage of the myraid of nutritional benefits of it. It was a green venture in a time when green wasn't yet a hipster trend - and perhaps for that time, Loux says, the public may not have been ready for it.

"It was a learning experience," she says. "To be running a restaurant at age 20 was still an incredible thing."

Her move to Maui was at least not in vain. The Island's balmy weather, laid-back lifestyle and abundant access to land and ocean resources could not have been more in tandem with Loux' own heartfelt philosophies, and shes remained a Maui girl ever since.

"I went to school in Vermont, and although it was extremely beautiful, it made me realize how much I wanted to live someplace warm," she says. "The island is life-changing. It cracked open what a life cycle is for me - I realize it's a finite piece of land and how precious resources are. It's evident how we humans manipulate the environment, and it's shown me that we have a deep responsibility to protect the island."

It was also where she fell in love at a pivatol moment - over organic hand soap.

Loux and Gordon are a kindred pair, their sincere appreciation for each other evident in loving gazes and glances through eyes that sparkle brighter than the flash of a photographer's camera. The two were introduced by a mutual friend, who knew of Gordon's chef management agency - he's credited with bringing Emeril Lagasse and Wolfgang Puck to fame, as well as several icons of Hawaii Regional Cuisine.

Loux met Gordon at his home after their friend insisted on a professional meeting to discuss Gordon possibly managing Loux's budding culinary career.

It turned out to be far more cosmic than that.

"It was a meeting of the mind, heart and soul," she says. "I immediately felt that I was going to know him the rest of my life."

Gordon's home had seen many a sassy rock star and spunky celebrity come through its doors, but none had ever questioned him about the handsoap in his bathroom.

Except Loux. Her moxie and conscientiousness cemented his connection to her instantly.

"We were friends for a long time before we realized we were madly in love with each other," Loux says. The couple was married in 2005 in an invitation-free ceremony - Loux thought to save paper that way, and figured word of mouth would bring to the event those who sincerely knew the couple. Guests included Cooper and Alicia Silverstone, who was Loux's "best lady". The Dalai Lama married Loux and Gordon in a beautiful beachfront ceremony.

Now, the two share the beautiful Kihei property, and Loux has infused her environmentalism in their lifestyle: chemical-free cleaning products, a garden of herbs, tropical flowers, tomatoes and eggplants, and the innovation of the first-ever two-story bamboo structure made in the U.S. (the guesthouse was built by architect David Sands, whom Loux says "recognized bamboo as a viable structural material").

Loux travels between Hawaii and the Mainland, taking her eco-friendly message to a new level with connections to Hollywood and New York. Her resume boasts three books (Easy Green Living, The Balanced Plate and Living Cuisine) that have become bibles and recipe gold mines in the green movement. She starred in a TV show called It's Easy Being Green, which aired on the Fine Living Network and showcased Loux mingling with the likes of David Duchovny and Helent Hunt. Loux also interviewed Michel Nischan (one of her role models), and Paul Newman just before his death in 2008.

It's not a stretch for the gorgeous, green-eyes belle to be the new poster child of planetary activism. And those who have worked with her attest to her genuine and compassionate nature.

"We were developing an upbeat, lively and informative TV series about the latest eco-friendly trends and looking for a great show host," says Scott Myers of Distillery Productions, which produced It's Easy Being Green. "Production can be a real grind - long hours, retakes, unforeseen surprises on location - and Renee took everything in stride. Of course, it's really helpful that Renee has a naturally upbeat personality.

"We have received tons of e-mail form viewers thanking us for letting them know how they can do simple, easy things to lead a more Earth-friendly lifestyle. As a beautiful, smart and authoritative voice, Renee is definitely making a contribution to the current 'green' revolution."

Loux takes her new iconic role in stride, and finds hope in the current wave of green-themed trendiness.

"Overall it's fantastic," she says. "The current band-wagon i a sign that it's what people want. Hollywood trendsets - it can be a double-edged sword, but at least lends exposure to the cause. Whatever gets you going into green is worth it."

SO can green and "luxury" coexist? Loux certainly thinks so. She laughs that Christian Louboutin shoes sit among a wardrobe of 75-80 percent organic designer pieces. She has no qualms about pointing out that it's not a double standard. Loux advises those seeking to live green to make choices that can easily be adapted into their own personal lifestyles.

"It's not an all-or-nothing game," she says. "One choice does not negate everything else. You can compromise what you can realistically do."

For a woman so entrenched in a noble cause, levity comes through stand-up paddle surfing, writing, and playing the ukulele "really badly." But more importantly, she basks in spirituality, appreciating the compassionate philosophies of Buddhism and living life accordingly.

"Approach love and cooking with reckless abandon," goes one of Loux's favorite quotes from the Dalai Lama.

And that's certainly a complementary motto for Loux, who's shown passion, profundity and genuine human concern as limitless as the Earth and Sky.